I first played Adventureland, the computer game, with my dad. I was maybe 10 years old and it was utterly fascinating. Here was a world you could interact with and it was all on a computer. There was a dragon that you dare not wake, a bottomless pit to climb down (but only part way or else!) and of course, chiggers. Yeah, chiggers. As a kid I had never even heard of them. I barely know what they are now. But the mystery that it created was enthralling. 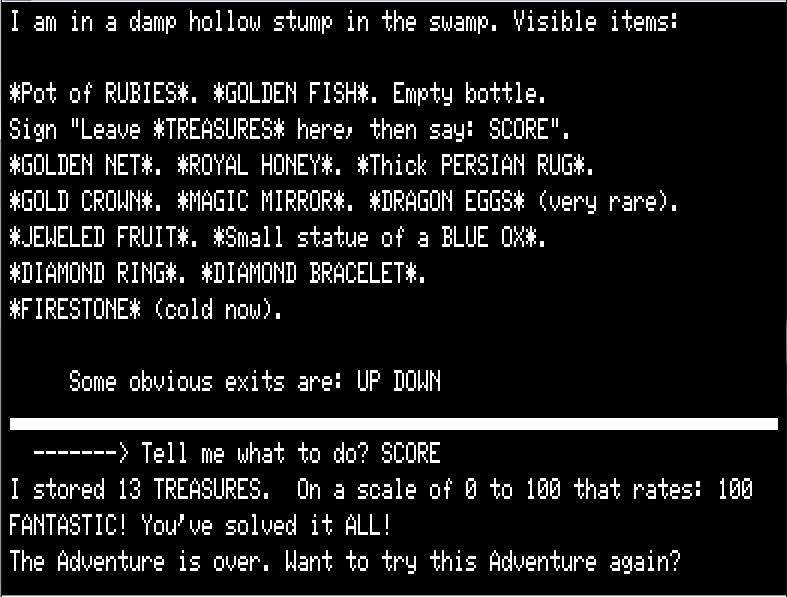 Adventureland is the first text adventure game for micro-computers. You type commands and tell it what to do. Hopefully it understands what you want – you have to use the right commands you see. Part of the fun is figuring that out.

I never got to finish the game. It was just too tricky for me and Dad but I had fond memories of it. Later in life I started remembering these times and sought out the game and had a great time playing it. Boy, it was tricky! But a lot of fun! Then I had the great privilege of finding the author, Scott Adams (not to be confused with the Dilbert author), on Facebook and becoming his friend. He did a bunch of computer games after this one. I have had some great chats with him, and he is an excellent chap. He is even writing a new game at the moment.

Adventureland is the very first computer adventure game ever. Kudos to Scott for being the father of these games and stimulating so many others to write games.

If you love computer games as much as I do, then have a go at Adventureland.