Dear User Who is Worried About Internet Speeds, 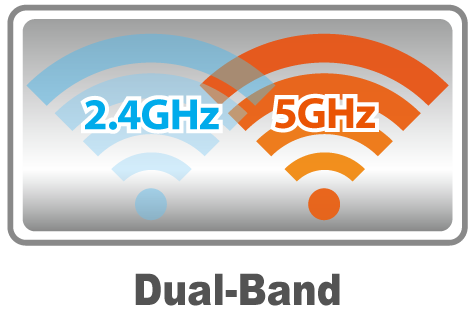 Given that Netflix advises a 25Mbit/s connection for their Ultra High Definition (4K with High Dynamic Range) video streaming and the router supports up to 300Mbit/s over Wi-Fi, you would be able to stream the highest quality available from any on demand video service to probably 8-10 devices (computers, laptops or tablets) simultaneously, assuming your Fibre connection was fast enough to keep up with demand.  A 5GHz wifi router could support speeds of 433Mbit/s assuming wireless devices connecting to it are capable, but it’s extremely doubtful they would be able to make use of the extra bandwidth unless you were transferring data from a faster source than the internet, say a large computer-to-computer file transfer within your own home, something that most people never do – they usually use a USB stick or hard-drive.

A 5GHz router would be costs about $40 more for an extra 133Mbit/s, something that I severely doubt would be worthwhile.  Note that 5GHz routers often claim faster Wi-Fi speeds than this.  The 5GHz router in this case claims 750Mbit/s, which is some misleading marketing (often common in the computer industry sadly).  433Mbit/s over 5GHz + 300Mbit/s over 2.4GHz = 733Mbit/s, then, rounded-up to 750 for the label on the box.  The problem with this is that devices can’t use both 2.4GHz and 5GHz channels simultaneously, so in truth, single wireless device performance is not much better over 5GHz than over 2.4GHz, and the range over higher frequencies drops off much faster.

So why bother with 5GHz?  In heavily built-up areas with dense housing and a large number of Wi-Fi devises, the 2.4GHz frequency channels/bands can get a bit noisy, leading to shorter effective ranges and speed.  5GHz doubles the number of available channels available to reduce congestion.  And that’s pretty much it.  Newer Wi-Fi standards are due in the next couple of years that will better leverage the higher 5GHz frequency and provide much more speed, but you would need to buy newer devices at the time which support it - think TV, tablet and/or laptop or any other computer device.

Also, what your ISP won’t tell you about your internet connection is that the Fibre provider Enable supply a 2.4Gbit/s connection to feed every 24 households, meaning that if everyone was using the Internet heavily at the same time, each household would only get 100Mbit/s each.  When you yourself have a 1Gbit connection, it is dependent on other households in the street not using their full allocation at the time for you to achieve speeds close to your theoretical maximum and servers on the internet being fast enough to supply that speed as well.  If more than one person in your 24 house block has a gigabit connection and both are trying to pull things down at maximum speed, that only leaves 400Mbit/s for the rest of the neighbourhood.

This practice is called over-selling.  It’s betting that not everyone will be using the service fully all the time and that the average use across all their customers won’t exceed the service level they provide, but as we all know, the internet seems to get a lot slower around school holidays, and this is the reason why.

It’s a bit technical, but not as bad as it seems, I hope this helps explain something about your wireless situation for your home computing.